Ok. I know. Silence and this long absence. I blame it to work partly and a bit to my sickness. The sickness is because of this unpredictable, cold, gloomy weather here in Bangalore. Anyway, feeling slightly better and posting the pics from my recent trip to Goa. Yes, my taste buds have gone for a toss, and my cravings for spicy food has just shot up. Hence, this food post 😀

This was an amazing juice I had. Apparently made of kokum, Garcinia indica, of berry family – very mildly spiced, with a hint of tang, and garnished with green chillies. 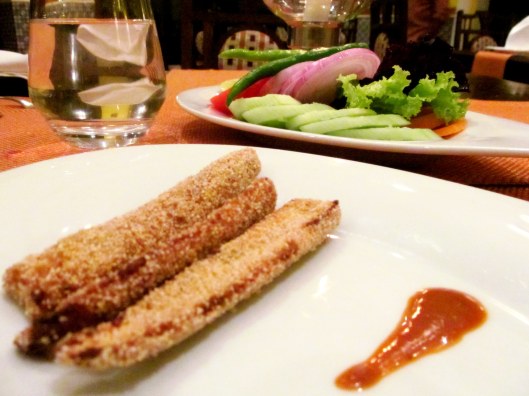 These were crisp babycorn fritters, which tasted heavenly. 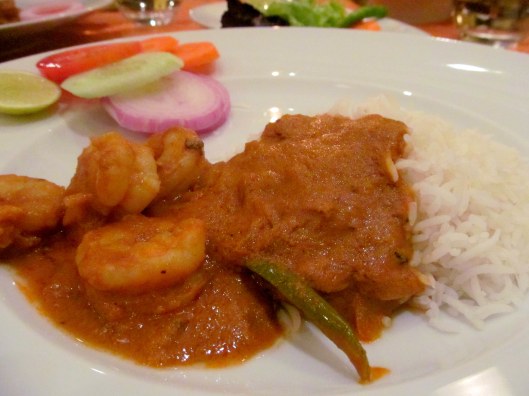 Like I said before, trying anything else other than sea food in Goa would have been a sin. So gorged on my favorite prawn curry. The prawns were fresh, succulent, and cooked to perfection with right blend of spices and condiments. 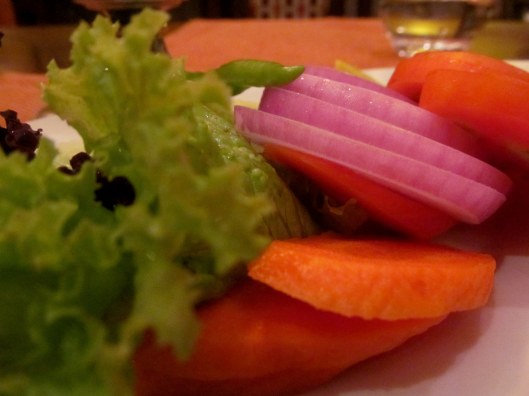 I am not a hard-core non-vegetarian and eat very very selective kinds. Stick to mostly chicken and very limited types of fish – Just prawns, pomfret and rohu fish, so I never had the zest to try out the exotic ones, like lobster, crabs etc. and I was just happy with what I had.

I did taste the local rice which is unlike the fine grains of Basmati. Similar to parboiled rice. The curried fish sauce with the rice very well complemented each other.

Am not too fond of the other Goan desserts, so just went ahead with this which was strongly suggested by the Chef there – it was not too bad.

I terribly want to eat some good food now – very spicy, hot and flavorsome. While I go and get it, do tell me if you liked this post? 🙂 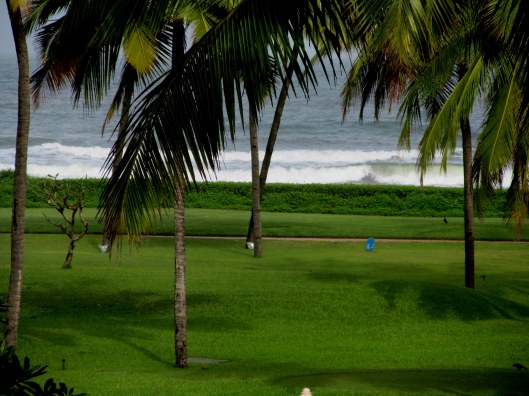 The View When I Woke Up

It was nothing less than a mystic dream, those three days – Beautiful, Panoramic and Blissful. They were the most indelible memoirs of my life. Far from the tumult of city, I got to escape and unwind in nature’s lap along the shores where tranquility had stationed itself for eternity.

So, where do I begin from – the mesmerizing overcast shadowing the magnificent Arabian sea, the monsoon struck weather, rain-swept grassy land, gleaming tender leaves of palm trees, the moist breeze wafting or just the overall feel of Goa? Everything was just so very terrific; including the sea food with Goan rice. Yes, it would have been a crime to try anything else there.

I have always been fearful of coasts, especially those monstrous waves, and since it was the monsoon season, there were already red alerts/flags everywhere. The lifeguard cautioned about the water having severe currents and how it could be dangerous and life threatening. Yes, I cheated a bit, but did not go deep, and maintained a safe distance.

The Walk Along The Coast

The joy is inexplicable and I reveled completely, listened to the soft rainfall, got soaked in the rain, walked along the coast,  soiled myself at the beach, photographed, and significantly loved every minute of my time spent there. It’s a paradise during the monsoons, I would say. Well, Beach is one such place, which must be visited at all seasons I believe, to witness its versatility.

It was a very short trip though, and many things were left unexplored – the charm of old parts of Goa, those colonial churches, the heritage sites, the culture, local Goan music, authentic Goan food, and interacting with the localites. I would definitely plan that sometime soon maybe.